Twenty-nine people joined in a zoom discussion, involving Fr Joe Caddy and John Warhurst (Canberra), both of whom were members of the Plenary Council, which met 4-10 Oct 2021. Joe spoke about the challenge of learning to trust people in the groups into which they were allocated. It was clear that the exposure of child abuse in the Church highlighted how the institution has sought to protect itself and created a sense of absolute betrayal. Joe thought it was evident insufficient room had been made for the laity, even 50 years after Vatican II. This crisis demands finding a new way of doing business as a Church. There are many voices, notably of women, the poor, prisoners, the LGBTQI+ community, that need to be heard within the Church. The methodology of the Plenary was useful for encouraging Deep Listening. How do we listen to the voice of the Spirit in such a group? There was great diversity in the Plenary, making it challenging to address specific questions, such as about conversion and ecological awareness. What is needed is trust.

John (who worked with Joe on the Council for Social Services) agreed with finding the Plenary was an amazing experience, being confronted by the diversity of the Church in Australia. It is not clear how the Plenary will evolve. There is still a window of opportunity, but a lot has to be done prior to the second stage of the Plenary in Sydney in 11-15 October 2022, as while many topics were raised, there were few concrete proposals emerging as yet. JW identified three broad areas of concern at the PC, namely: (1) policy issues, including child abuse, (2) recognition of Indigenous culture and spirituality (and the Uluru Statement of the Heart), (3) ecology. Some issues related to organization and governance (involving synodality, the need for both Parish and Diocesan Pastoral Councils, and education issues). Other issues were little discussed, if at all, namely issues of women’s ordination to diaconate and priesthood, married priests, attitudes to sexual minorities. A lot more still has to be done.

Joe and John agreed that members of the Plenary did air their views in a relatively free way, especially as trust started to develop within groups, even when there were divergent views. The Thursday sessions, much devoted to child abuse were emotional and tough, but important. While some bishops asked to be addressed on first name terms, some laypeople preferred more formal styles of address, creating some awkwardness.  [It was suggested that in future, this issue be clarified from the outset.] Joe commented on the challenges facing bishops, as it was so difficult to be across all the issues they are confronting.  There were also catholics from the eastern rite, with their own traditions. Reporting back from smaller groups was done by lay people, rather than bishops. The lay people present had very varied views.

There is continuing need for transparency, not always evident prior to the Plenary. To questions about outcome, it was evident that so many issues were raised, that it was hard to achieve focus. The meeting raised issues for the reform of canon law, with recognition of issues that could be changed, even if others would be harder to change. It was important for the Australian Church to make known its views to the wider Church.  It was observed that many issues relating to gender had already been raised in the Woman and Man report presented to the bishops in 1999 Woman and Man (catholic.org.au)  but have still not been implemented. Those who had seen summaries of the daily reports look forward to their being made available as soon as possible (as promised). Joe and John agreed that with so many issues on the table it could be difficult to achieve focus. Nonetheless, there were some issues where a community like St Carthage’s could move forward, notably in terms of synodality, pastoral planning and issues of inclusivity (which do not necessarily have to wait for reforms in canon law). When asked whether they had received any ‘Emmaus’ moment, John recalled that the sexual abuse debate was perhaps most moving, while Joe recalled the realization of learning to trust someone whose views might be very different.

Our next Parish Discussion Group will be held on Tues 23 Nov 7.30-8.30 pm. If you wish to add your name to this group, or have suggestions for future topics, contact Constant.Mews@monash.edu 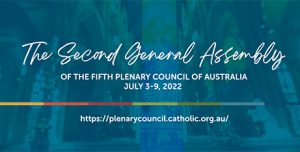